This article details an example configuration for running an Elixir/Phoenix workflow on GitHub CI (aka GitHub actions).

This is an update to my previous article which used the (now redundant) beta version of GitHub workflows.

GitHub has made actions available to anyone that requests it and is planning on launching in November so now is a good time to start moving your projects across.

There are a lot more features available now including matrix builds and attached services. GitHub also detects an Elixir repository and gives you a starting point for your workflow. 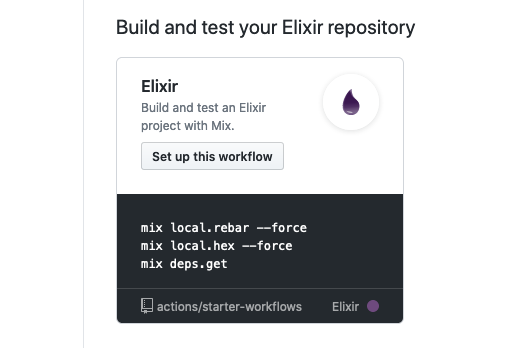 This works great for very basic setups, unfortunately for me the first stumbling block was the container image doesn’t have any build tools (eg. make) so it wasn’t able to compile bcrypt_elixir among other dependencies.

Hovever, the host does have build tools available so instead of running it in a container we can install elixir and erlang (OTP) on the host. GitHub even have an action to do this which is handy!

This will work as a simple CI for a lot of Elixir projects, but for Phoenix projects we need a bit more.

This configuration sets up a standard Elixir/Phoenix environment (OTP, Elixir and Node) with a Postgres container. It then compiles the code and assets, runs the tests and builds & publishes a release to GitHub releases.

We’ve also added the strategy/matrix configuration above which isn’t entirely necessary in this example but I like how it ends up having all the versions of dependencies clearly labelled in one place and it allows for extending the matrix to other versions very easily.

A couple of gotchas I found so far (which could be user error) are:

The newer format is definitely a lot easier to follow and is extremely powerful. It still takes a while to run, there’s no official caching support (though there are a number of optimisations behind the scene) but I expect that to improve soon.

You can see an example of an phoenix project running an adaptation of this configuration on GitHub at moomerman/httping.

If you have any tips or feedback please get in touch via Twitter.

Get my latest posts and other insights from work and the web via my Roundup newsletter.